Comalis are all set to take part in the traditional round. Stay tuned to know what is in store for them! Pugazh is a standup comedian who is better known for his stage name Cooku With Comali Pugazh. He is a multi-talented actor who loves to do mimicry, Standup comedy in the famous television channel Vijay Tv.

He becomes famous for his comali role in Cooku WIth comali along with his artist Ramya Pandiyan, Vanitha Vijayakumar, Rekha, and Balaji. Earlier Life/Family Cooku with comali Pugaz was born on 14 November 1990 in Cuddalore, Tamilnadu. The age of Pugaz is 30 years old as of 2020. He was born to a middle-class family. Pugazh studied up to 10th standard in Sri Padaleswarar Higher Secondary school.

He discontinued his studies due to family reasons. His parent’s and mother’s name is yet to be updated. He has brothers and sisters but the name is unavailable. Pugazh is unmarried and he is still single. He has not committed to anyone. He belongs to the Hindu religion and the caste of the family is unknown. Pugazh came to fame after participating in cooku with comali shows. He moved to Chennai to earn money due to some financial issues. He is worked in the water wash company near prasad studios. But he has keen on acting and also he is good at Mimicry and stand Up comedy.

One day he has got a chance to meet his longtime friend Baana Kaathadi fame Udhaya Raj and he got an opportunity to attend Kalakka Povathu Yaaru Season 6 audition but he failed to deliver his talent in the stage. But Pugazh never gives up, he worked hard and entered into the Vijay tv as a computer serviceman and also did cameo roles in the Sirippu Da shows along with KPY Dheena. Finally, he grabbed the opportunity to play Anniyan’s role as a lady who grabbed the attention of viewers. After his performance in the Kpy Final gave an opportunity to participate Cooku WIth Comali shows with all contestant. He used an opportunity and acted well which gave him a cinema chance.

He played a cameo role in the Ra Vijaya Murugan film Cocktail with Yogi Babu. Vijay Tv Pugazh Salary/ Net worth Pugazh gets an income of 5 to 10 thousand Per shows. He is now in the starting stage so he will get more income once he got a more chance to act in cinema. Unknown Facts He was born to a middle-class family He has worked in Car washing shed before moved to television. He has a chance to participate in Bigg Boss Season 4 Tamil. He has the interest to play Pubg during work hours. 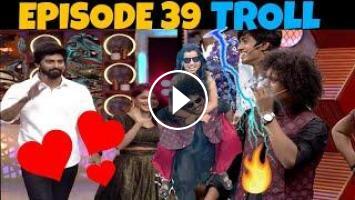 Cook with Comali Episode 39 Full Episode Troll Enna Thala Comalis are all set to take part in the traditional round. Stay tuned to know what is in sto...